We demand a Parliamentary Inquiry into Gender-Affirming ‘Care’.

Gender identity affirmation is marketed as ‘being your authentic self’ it’s based on the idea that 'you were born in the wrong body' and requires therefore 'gender affirming care;' pharmaceutical products; puberty blockers, hormones and extreme body modifying surgery to achieve an appearance matching one’s “gender identity”: a subjectively experienced inner sense of self as the gender opposite to one’s actual sex of male or female.

There is a new industry around gender affirming care, and when made mandatory in law via conversion therapy bans it ensures the purchase of hormones and drugs throughout a youth's lifetime. This is highly profitable for the pharmaceutical industry, doctors, and LGBT+ organisations that are funded to market this branding promoting transgenderism and prioritising the ‘T’ over the LGB.

But the surge in young Australian & New Zealanders particularly young girls identifying as transgender means that the number of people harmed by automatic gender-affirmation will increase.

Where is this coming from?

Schools, Social Media and Media complying to ACON
In Australia, the promotion of queer theory-inspired beliefs in schools pits school authorities against parents, subverting parental authority, regarding whether the “non-gender-conforming” expression of a child warrants social, medical and/or surgical intervention. Previously education—and society at large—took no interest in a child’s “gender expression”. But now, social media influencers and media outlets like the ABC and SBS, complying to ACON's LGBTQ+ audits, promote the incoherent ideal of “being your authentic self” via narratives that plug transgenderism as a solution to gender dysphoria.

Conversion Therapy Bans based on Gender Identity
Prominent LGBTIQ+ lobbies; Equality Australia, ACON, Rainbow Health Australia and other ILGA Oceanic members demand Conversion therapy bans be based on ‘gender identity’ as well as sexual orientation. Even though past harms to LGB via conversion therapy centred on sexual orientation only. A ban on Gender Identity conversion therapy results in gender non-conforming youth; primarily gay, lesbian and Autistic children labelled as 'trans' and hence subject to gender affirming care. LGB Alliance, LGB Defence, LGB Tasmania, Coalition of Activist Lesbians and other LGB organisations argue therefore this practice is transing primarily gay and autistic youth, to a heterosexual norm, especially as their gender dysphoria typically dissipates once through puberty.

Where has this led us?
Australia first saw a child removed from her parents, in WA November 2020, for the purpose of breast amputation to affirm her “male” gender identity. This was against the will of her parents. The Australian branch of the Rapid Onset Gender Dysphoria (ROGD) parent support group reported there are nearly 100 other families in the same situation in September 2021. In June 2022 this is now 200+, with 16 new families seeking help last May. We can also report we have some 300+ detransitioners in Australia, this number is only going to grow exponentially as the numbers of children and youth are pushed to the Gender Clinics.

Medical experimentation conducted without scientific justification or meaningful informed consent was outlawed during the Nuremburg trials in 1947. We are strongly against treating the mental health issues in youth with a one size fits all solution putting youth on a conveyor belt of drugs, hormones and ultimately a surgeon's knife.

If you are for keeping young people whole and intact and addressing the root of their issues: Take Action now

Health Professionals, Journalists, Politicians and Parents Start Here for an evidence based overview on the impact of gender identity ideology on health care.

Stay up to date with our network of health professionals who share information on the harms being done to under 18s in the name of gender-affirming care here: "Active Watchful Waiting Australia"

And, we invite Detransitioners and those of the Australian Branch of the ROGD parent group to confidentially share your experiences and stories. Your name and location will be kept private.

Our witness at the QLD BDMRR Bill public hearing

Is there a risk of self-harm or suicide if youth can't 'transition' to the opposite sex?

Answering the question: "Is there significant risk of self-harm or suicide if youth can't 'transition' to the opposite sex? "

One of the ROGD Mums testimony

What I’m here to talk about has utterly consumed the past seven years of my life, but I only have a few minutes to share it with you...

It’s important to understand that the Gender industry is an international project with key partners driving the industry. In this 4-part...

Ever wonder how intelligent, caring adults can not only accept children and young people taking experimental drugs, synthetic hormones,... 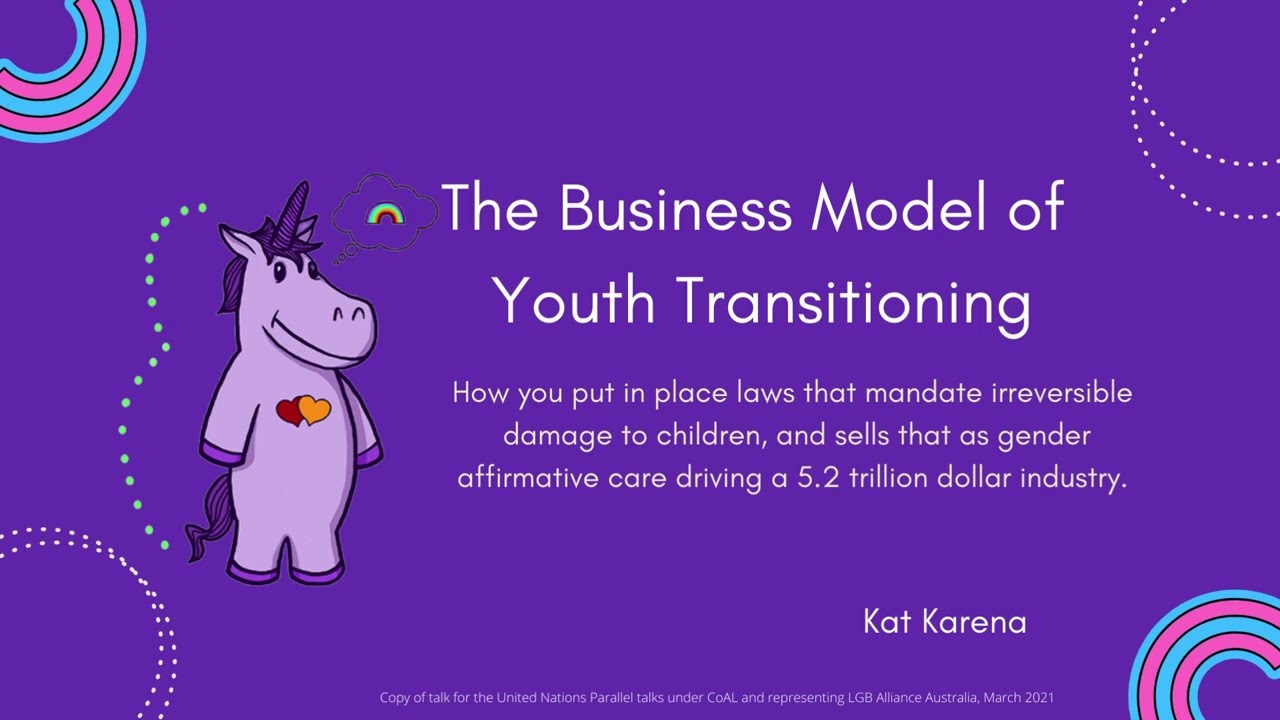 Industries prefer their products and services to be scaleable, one size fits all solutions for higher profits. A solution to a problem...

"Our whole family is under seige"

I am a left-wing, secondary teacher of visual arts in an NSW HIghschool. I fully support the new marriage rights of LGB people, and my...